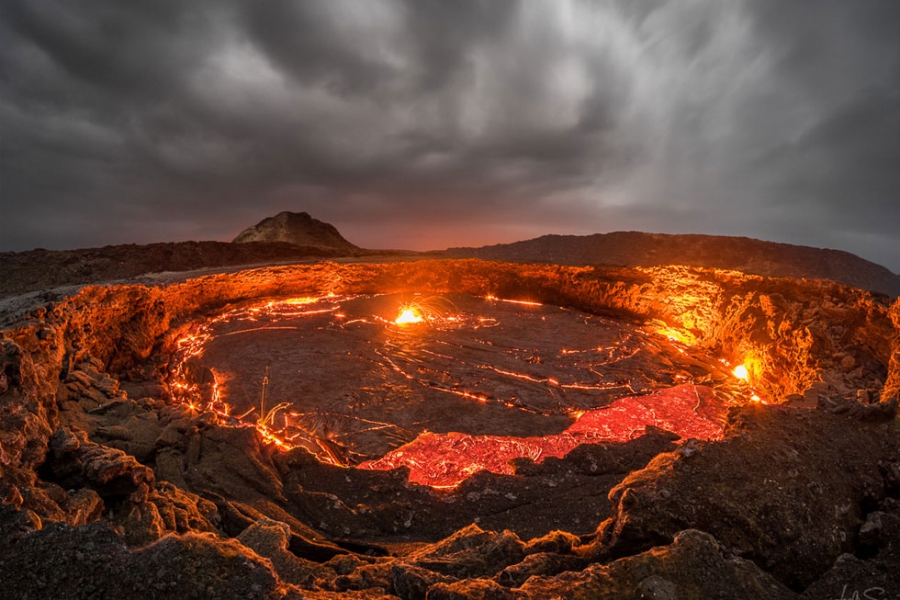 The cornucopia of natural beauty that blesses Ethiopia offers an astonishing variety of landscapes: Afro-Alpine highlands soaring to around 4,300 meters, deserts sprinkled with salt flats and yellow sulphur, lake lands with rare and beautiful birds, moors andmountains, the splendor of the Great Rift Valley, white-water rivers, savannah teeming with game, giant waterfalls, dense and lush jungle the list is endless.
Ethiopia's many national parks enable the visitor to enjoy the country's scenery and its wildlife, conserved in natural habitats, and offer opportunities for travel adventure unparalleled in Africa.

The Ethiopian Rift Valley, which is part of the famous East African Rift Valley, comprises numerous hotbabogaya-riftvalley springs, beautiful lakes and a variety of wildlife. The valley is the result of two parallel faults in the earth's surface between which, in distant geological time, the crust was weakened, and the land subsided. Ethiopia is often referred to as the " water tower" of Eastern Africa because of the many rivers that pour off the high tableland. The Great Rift Valley's passage through Ethiopia is marked by a chain of seven lakes.

Each of the seven lakes has its own special life and character and provids ideal habitats for the exuberant variety of flora and fauna that make the region a beautiful and exotic destination for tourists.

Most of the lakes are suitable and safe for swimming other water sports. Besides, lakes Abiata and Shalla are ideal places for bird watchers. Most of the Rift Valley lakes are not fully exploited for touristic purposes . The Rift Valley is also a site of numerous natural hot springs & the chemical contents of the hot springs are highly valued for their therapeutic purposes though at present they are not fully utilized. In short, the Rift Valley is endowed with many beautiful lakes , numerous hot springs, warm and pleasant climate and a variety of wildlife. It is considered as one of the most ideal areas for the development of international tourism in Ethiopia.

Sof Omar, a tiny Muslim village in Bale, is the site of an amazing complex of natural caves, cut by the Wab River as it found its way from the nearby mountains. The settlement, which is a religious site, is named after a local Sheikh.
Armed with torches and official map, visitors to Sof Omar make their way underground, far into the bowels of the earth, beside a subterranean stream, and there can see an extraordinary number of arched portals, high eroded ceilings and deep echoing chambers

Dallol is at the northernmost extension of the[Great] Rift Valley. It is below sea level and acts like a cauldron, trapping all the heat. Dallol is a field of phreatic craters in the barren salt plain NNE of the Erta Ale Range in one of the lowest (and hottest) areas of the desolate Danakil depression.
The Dallol craters are the Earth's lowest known subaerial volcanic vents. The most recent of these craters, Dallol, was formed during an eruption in 1926. Colorful hot brine springs and fumarolic deposits are found in the Dallol area.

dollo-sulfur-hot-springThis is a desert with some areas that are more than 116 meters (328 feet) below sea level. This is special because it is one of the lowest points on earth not covered by water. There are hot yellow sulfur fields among the sparkling white salt beds. Heat isn't the only thing people feel in the Dallol Depression. Alarming earth tremors are frequently felt. There are also several active volcanoes.

The active volcano Mount Erta Ale, (in whose crater lies the world's only below sea level land volcano, and world's only permanent lava lake), techno-coloured landscapes, incredible mineral deposits, sulphur lakes and bubbling sulphur springs, are facinating sights not to be missed.
Weather wise, the hottest places on earth are the Dallol Depression in Ethiopia and Death Valley in California. Temperatures can reach as high as 145 degrees Fahrenheit (63 degrees Celsius) in the sun, and top 93° Fahrenheit (34° Celsius) every day of the year. In the summer, not a single day dips below 104° Fahrenheit (40° Celsius). Dalol holds the record for the highest average annual temperature.