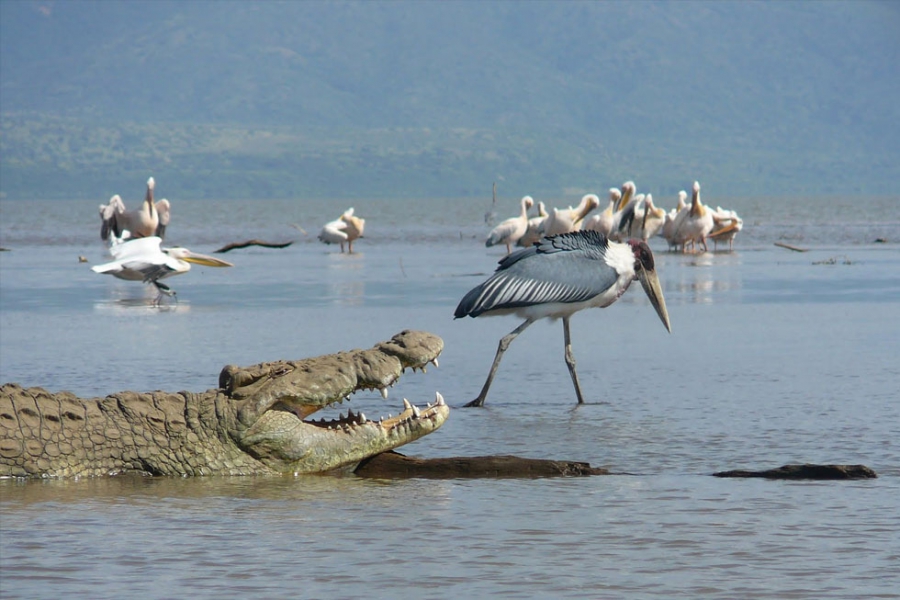 The Great African Rift Valley extends down from Jordan in the Middle East all the way down to Mozambique in Southern Africa. It splits the country’s highlands in two and contains the Rift Valley Lakes to the south. These lakes are well known for being amongst the deepest and oldest lakes in the world, as well as for containing 800 species of cichlid that can be found nowhere else in the world (these are especially obvious in Lake Nyassa/Malawi in the Southern Rift Valley Lakes, found in Malawi).

The lakes are mostly alkaline, and do not have outlets for the water contained within them. The major ones are Lake Abaya, Lake Chamo, Lake Awassa, Lake Ziway and Lake Abiata. Whilst Lake Tana is the most well-known lake in the country, it is not one of the Rift Valley lakes, and is found in the highlands next to the town of Bahir Dar.

Lake Abaya was originally known as Lake Margherita, and is fed on the northern shore by the Bilate River. Due to a large number of sediments suspended in the water, the lake has a red colour. It does not have an outlet, but when it is very full will flood into nearby Lake Chamo. The lake shore to the south is part of the Nechisar National Park.
The Nechisar National Park protects the Nechisar “White Grass” Plains as well as the two lakes and the mountainous ‘Bridge of God’ dividing the lakes. There is a rich habitat density here, from acacia scrub to open grasslands, and there are 70 mammal and around 340 bird species that can be found here. There are also 15 endemic butterflies, and 8 endemic dragonflies which can be seen on the lakeshores. The park is beautiful and unusual, largely to the two lakes it protects.

Lake Chamo is located to the south of Lake Abaya, and the northern shores are also protected by the Nechisar National Park. There is no outflow to this lake, but it will overflow into the Sagan River. It has healthy populations of hippo and crocodile, and is a wonderful blue colour.

Lake Awassa is the most studied of the Rift Valley Lakes, and it is a freshwater lake which indicates that even though it does not have a visible outlet, the water must leave through a subterranean outlet. Set in a volcanic crater, it has an abundance of plankton and fish, and supports a large city of the same name that has grown up on its edges. With a mountainous backdrop and beautiful vegetation, this is a beautiful lake to spend a night by. There is also a dyke which was built to stop flooding, which is perfect for birdwatching – walking along it, fish eagle, black-winged lovebirds, yellow-fronted parrots and the country’s indigenous oriole are a few of the many species of birds that can be seen.

Lake Ziway is also a freshwater lake, and it has five islands of which one is said to have housed the Ark of the Covenant; this is clearly a topic of some debate, as one of the islands in Lake Tana at Bahir Dar is also said to have been the site the Ark landed on! The lake is fed by the Meki and Katar Rivers, but does not always have an outflow; sometimes it overflows into Lake Abiata. The lake has plenty of hippo in it, and has a healthy population of birds.

With large numbers of Tilapia nilotica, a fish that can weigh up to 1.5 kg, the fishing industry does well here and the fish are served fresh in many of the restaurants in the nearby town. The fish also attract a large number of water-associated birds, which can be seen in the reed-lined fringes of the lake. Lake Abiata is to the south of Lake Ziway, and to the north there are a number of hot springs which are important to the locals, and are also a popular tourist attraction.

The lake is saline, and has recently undergone a decline in water level. This has resulted in the loss of fish-eating birds as the fish have died, but an increase in algae-eating birds such as greater and lesser flamingos. The lake is located in the Abiata-Shala national park, and amongst the attractions here the greatest are the beautiful lakes and the hot springs. These are hot enough to cook maize, and has an almost Biblical atmosphere due to the steam and the white-robed bathers that appear through the mist amongst the reeds.