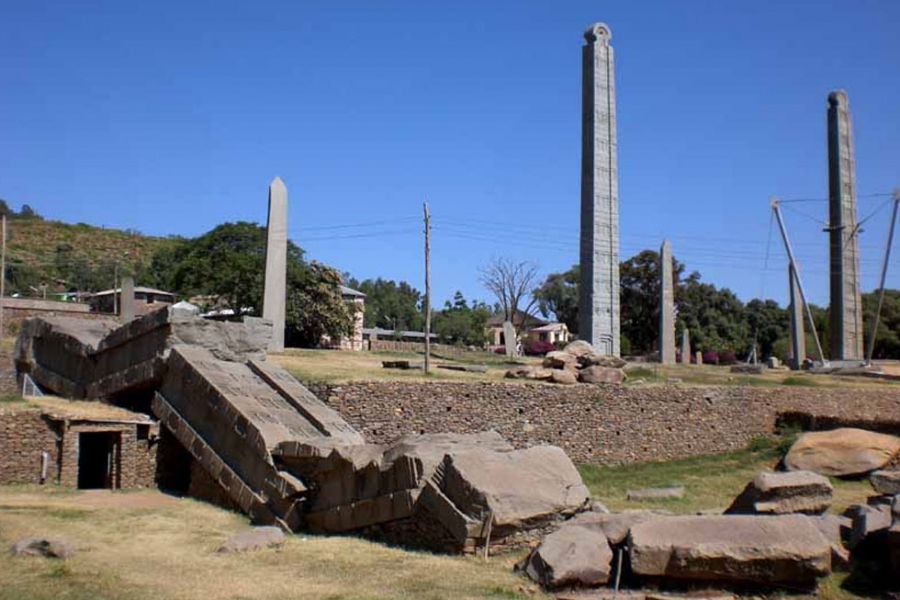 Aksum is perhaps most famous and well known by the mysterious stelaes. It is also the alleged resting place of the biblical Ark of the Covenant and the purported home of the legendary Queen of Sheba. The Kingdom of Aksum or Axum, also known as the Aksumite Empire was an important trading nation in northeastern Africa, ruled from approximately 100–940 AD. The Empire of Aksum at its height extended across most of present-day Eritrea, northern Ethiopia, Yemen, southern Saudi Arabia and northern Sudan. The capital city of the empire was Aksum, now in northern Ethiopia. The Kingdom used the name "Ethiopia" as early as the 4th century.

The Aksum Empire was named as one of the four great powers of the world along with Persia, Rome, and China. Aksum’s prosperity seems to have peaked in the late 3rd and early 4th centuries AD. Monumental royal tombs were constructed, each marked by a huge monolithic stela carved to represent a multi-storied building. Around the same time, Aksum began to produce its own coinage, with gold used for international trade, and copper and silver for local circulation. In about AD 340, the Aksumite kingdom formally adopted Christianity under king Ezana (320–360 AD), becoming only the second nation in the world (after Armenia) to do this.

History of the Aksum Kingdom

Aksum ObliskAksum lies on the western side of the northern Ethiopian highlands, some 200 km inland from the strategic ancient port of Adulis on the Red Sea coast of modern Eritrea. Aksumite kingdom rising to importance around the time of the birth of Christ. During the first seven centuries AD, Aksum was the capital of a major far-reaching empire, a kingdom that dominated the vital crossroads between Africa and Asia for almost a thousand years. The Aksumites introduced a written language, Ge'ez, and created a new imperial power and political cohesion. They also gave Ethiopia its first organized religion – Christianity -in the fourth century AD.

Aksum rose from the gradual merging of an indigenous farming population with immigrants from southern Arabia. These had settled in the region several hundreds of years previously, bringing with them important cultural traditions, including literacy in a Semitic language. Aksum rapidly became powerful and prosperous. It occupied fertile land, and with access to ivory and gold the Aksumites established political leadership over surrounding populations, and attracted trade from far beyond its own borders, mainly through the port of Adulis. Despite this, and its literary and technological achievements.

Gadarat or also known as GDRT was most likely the first Aksumite king to be involved in South Arabian affairs, as well as the first known king to be mentioned in South Arabian inscriptions. His reign resulted in the control of much of western Yemen, such as the Tihama, Najran, Ma'afir, Zafar (until c. 230), and parts of Hashid territory around Hamir in the northern highlands. Furthermore, GDRT's military alliances and his conquests in Yemen and Saudi Arabia, the required formidable fleet for such feats, and the extension of Aksumite influence throughout Yemen and southern Saudi Arabia all reflect a new zenith in Aksumite power.

His involvement would mark the beginning of centuries of Aksumite involvement in South Arabia, culminating with the full-scale invasion of Yemen by King Kaleb in 520, resulting in the establishment of an Aksumite province covering all of South Arabia. GDRT's name preserved in Ethiopian tradition through the book of The Kebra Nagast or The Glory of Kings, traditional king lists, as what seem to be variants of his name crop up in three of them. Zegdur (ze meaning 'of' in Ge'ez) listed as the third king, after the legendary Menelik I.

Early in the 6th century AD, Aksum engaged in warfare in South Arabia, which soon drained the state’s resources, and Christian Aksum declined in prosperity and international importance. As the sixth and seventh centuries progressed Aksum's position grew more difficult. The independence of the Yemen was followed by its conquest by Persia during the reign of the Sassanian king Khusro I (531-579), and further Persian disruption of the Roman east followed with the conquest of Syria and Egypt under Khusro II. This seems to have dried up some of Aksum's flow of trade, and the kingdom's expansionist days were over. Arab conquests followed in the mid-seventh century, and the whole economic system which had maintained Aksum's prosperity came to an end. Christian Ethiopia retained its control of the highlands, but seems to have turned away from the sea in the centuries after the advent of Islam and begun to look more southwards than eastwards during the following centuries.

The spectacular rise of Islam in the seventh century was the main cause of Aksum's decline. Although there was no direct aggression, Arab influence in the Red Sea cut off trade and cultural relations, and Ethiopia found itself isolated from the rest of the world. However, even after the realm's decline, the city remained Ethiopia's religious capital as well as the place where several medieval emperors went to be officially crowned. The town abounds in archaeological remains - including the graves of kings, the foundations of a palace, inscribed tablets, and great carved obelisks.