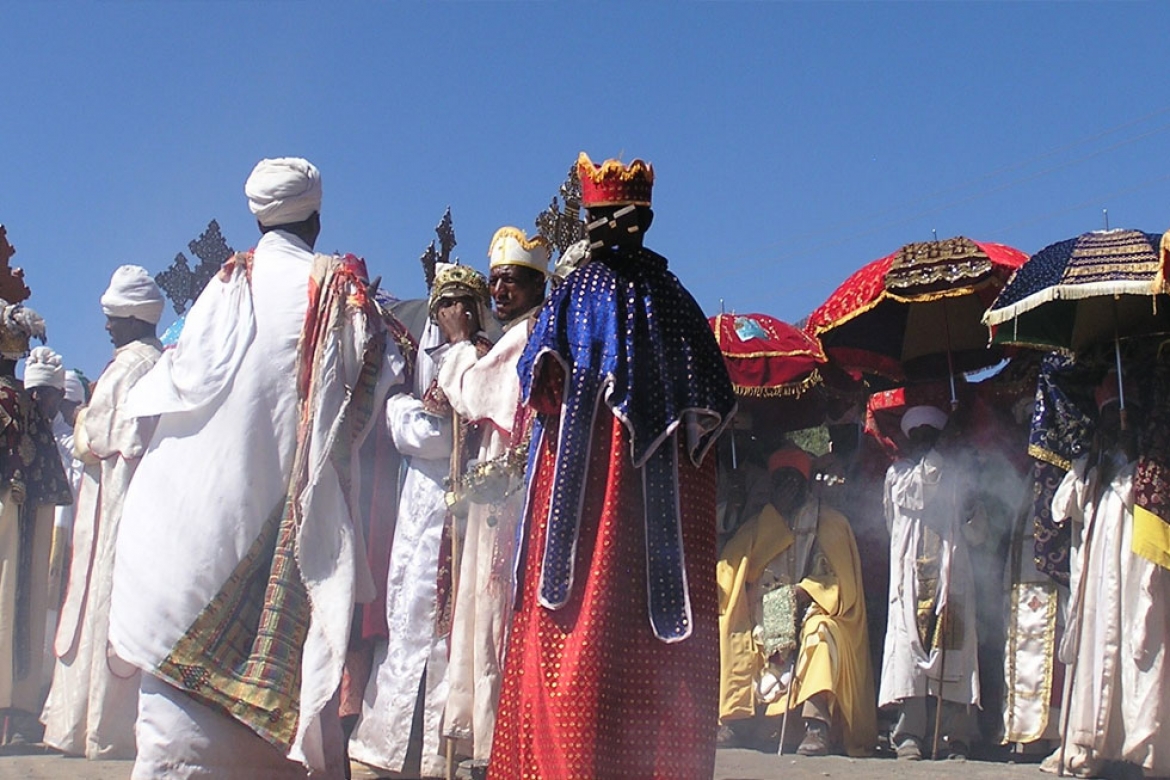 The festival of Timket falls on Tirr 11(January19) every year. It is observed in commemoration of Jesus Christ’s baptism in River Jordan. The celebration of Timket starts on the eve of the main festival.  The eve is known as ’Ketera’ and taken from the Amharic word ‘ketere’ meaning to  make a dam; it is usual to make a dam in some places where there is no enough river water for the celebration of Timket.

In the afternoon of Ketera the tabots (holy Arks) from each of the churches are taken to a significant water body. Accompanied by a great ceremony, each tabot is carried overhead by a high priest. It is taken to spend the night there, an activity that helps in performing the timket ceremony, usually done early in the morning the time Jesus Christ was baptized. The ceremony extends throughout the night and the next day early in the morning the Timket celebration start. The ceremony begins with the pre-sun rise rituals which include the Kidane (Morning Prayer) and the KIdasie (the divine clergy). These rituals are followed by the blessing and sprinkling of the blessed water on the assembled congregation in commemoration of Christ’s baptism.

According to the interpretation of the Ethiopian Church, the term Timket is taken from the Ge’ez word Asteryo meaning “reveal”. This meaning is associated with the revelation of the trinity, or the unity of God the father, the son, and the Holy Ghost during the baptism of Christ. In Greek language, the word “baptism” refers to immersion in water, thus Christ himself was baptized by being immersed in water, river Jordan. Consequently, Timket is supposed to be performed by immersion in a body of water. But, in most cases, priests usually sprinkle the blessed water over the congregation, except in few cases where a larger pool is available immersion or to swimming like that of the bathing Palace Fasiledes in Gondar.

At about 10 or 11am, each tabot begins the journey back to its respective church. This involves an even more colorful ceremony with a variety of traditional and religious songs. The priests wear astonishing brocade ceremonial clothes and carry decorated umbrellas, while chanting to the accomplishment of drums and the rhythmic clink of the sistrum and other instruments. Although it is colorfully celebrated throughout the country, Timket is highly regarded in Addis Abeba, Lalibela and Gondar.

In Gondar, the bathing palace of Fasiledas is still dedicated to this colorful ceremony. It is still filled with water each year by a canal from the River Keha for the colorful Timket celebration. Besides the baptism of Jesus Christ, the celebration of Timket in Gondar also commemorates the re-baptizing of thousands of people who have converted from Catholicism to the Orthodox faith. Even though Gondar can be visited at anytime of the year, the city is a wonderful place of visit during this season as it gives one a chance to witness the colorful ceremonies of the timket Festival.

In Addis Ababa, Jan Meda is the ideal place of witnessing the colorful celebration of Timket. In Lalibela it is equally celebrated like that of Christmas with relatively less crowd-situations of the flocking pilgrims.  Traditionally, Timket was known as an important occasion for young adults to choose the would-be lovers.